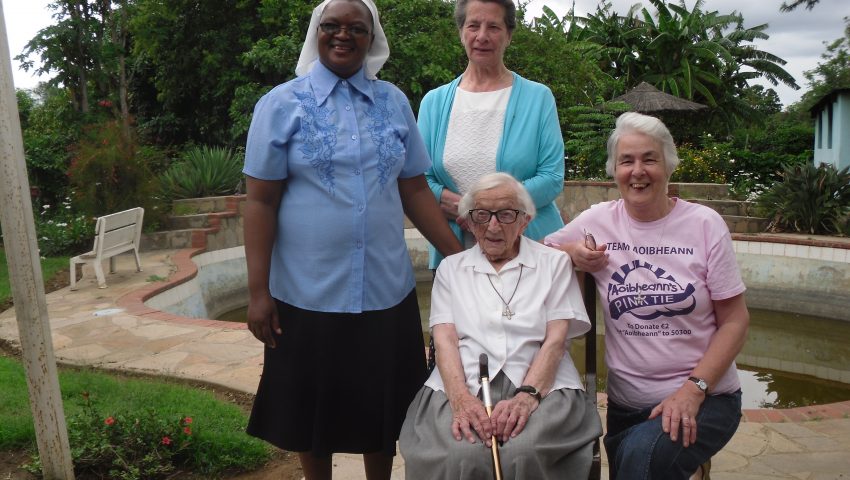 On December 17th, Sr Christopher Angell CJ celebrated her 100th birthday. Sr Christopher is a member of the English Province, but has been living and working in Zimbabwe for many years.

Sr Ann Stafford and Sr Michaela Robinson went out to Zimbabwe to celebrate Christopher’s birthday with her, and to visit some of the communities and missions of the Zimbabwe Province.

On 11th December, Ann and Michaela visited the clinic run by the CJ sisters at Chishawasha, where Sr Mercy also gave them a tour of St Ignatius College, which is run by the Jesuits.

A few days later, they moved on to Kwekwe, where they visited a maternity clinic run by the CJ sisters, and were reunited with Sr Christopher. Michaela said, ‘I had not seen her since the mid1980s and, though frail in body, her mind is clear and her voice is as I remembered it. She is quite amazing and with the aid of her “stroller” gets around the house very quickly!’ Ann had brought an iPad, so she was able to share many photographs with Sr Christopher, who is always interested in all the news from the English Province.

The sisters in Amaveni, a suburb of Kwekwe, run a large orphanage, home to some 73 orphans ranging in age from 7 months to 19 years old. The orphanage is organized into ‘families’, with a ‘mother’ looking after ten or twelve children, and older children helping to take care of younger ones.

Michaela writes, ‘I had been given some US$s by a very kind friend of mine in order to buy some treats for the children for the festive season but we learnt from Sr Aletta that they were lacking the basics so plans changed and instead with Sr Mercy’s help we shopped for thirty six loaves of bread, boxes of bananas and apples, some sweets for Christmas, a cake to have at the end of their evening meal and a lollipop each, so much for giving the children a treat instead we found ourselves buying the basics we take for granted.’ Ann and Michaela were both struck by the happy, family atmosphere of the orphanage.

The celebrations for Sr Christopher’s birthday on the 17th were very joyful. The local bishop celebrated Mass in a mixture of English and Shona, with hymns chosen by Sr Christopher, who had arrived for the occasion in a specially decorated truck. After the Mass there was a celebration lunch for CJs, local parishioners and clergy and some of the children from Amaveni.

A few days later –after a trip to a local wildlife sanctuary– it was time for Ann and Michaela to depart. Michaela writes, ‘We left for Harare shortly before lunch once again under a shower of petals with the last glimpse of Sr C waving her stick, a new one from one of her friends.’

We thank God for Sr Christopher’s many years of faithfulness, and for all the wonderful work done by the CJ Sisters in Zimbabwe.