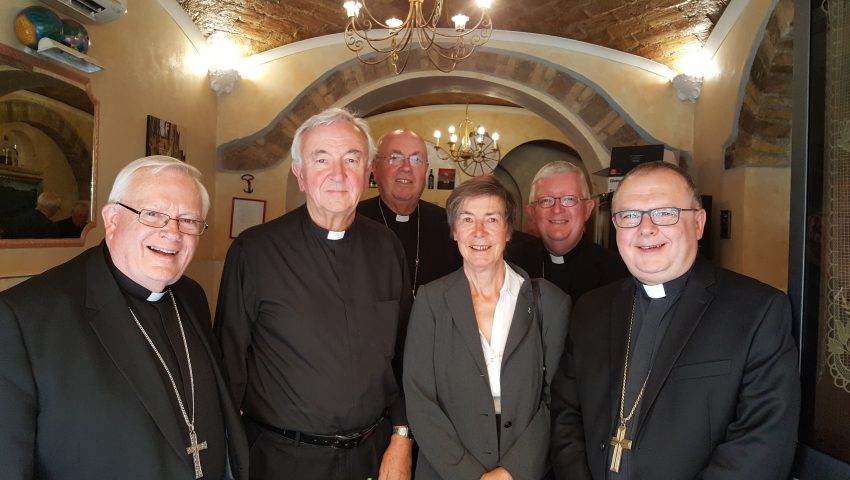 Yesterday’s visit was a double first: ‘What made yesterday’s visit unique’, says Sr Frances, ‘was that, for the first time in the history of an ad limina visit to this particular dicastery, a member of a religious congregation –and a woman, me– was invited to join them.’

England and Wales are one of the few places where the Conference of Religious enjoys membership of both male and female congregations. England and Wales also have a ‘Mixed Commission’ forum, in which a group of bishops and religious meet regularly to discuss common issues and share future planning. Sr Frances is part of the Mixed Commission and, having spent nine years in Rome as part of the Congregation of Jesus General Council, is familiar with the workings of Vatican departments (dicasteries). It was therefore proposed that, in a double first, she should be the first ever representative of a religious congregation –and first woman!– to join the bishops’ ad limina visit to the dicastery for religious.

Sr Frances writes, ‘All the bishops of Mixed Commission were present with Archbishop Bernard Longley of Birmingham, and Bishop Alan Williams of Brentwood, himself Marist, who led the meeting for the bishops. The setting was formal, and translation in English/Italian was provided simultaneously. We were each invited to introduce ourselves, and then we listened to a long account from Monsignor Carballo on what initiatives the dicastery is presently working on, including a whole series of new publications. There followed a lively but courteous exchange of some of the current issues facing religious congregations and the diocesan bishops at present.

What emerged from the exchanges was the huge appreciation that diocesan bishops have of the work and presence of the religious in their diocese. On most issues that required an understanding of the situation from a viewpoint of the religious I was asked to speak which I was happy to do.

The meeting concluded with a prayer, and expressions of appreciation all round. All present were aware that a precedent had been set in having a woman religious as part of the ‘ad limina’ and Mons. Carballo expressed this sentiment with warmth and gratitude. I hope this precedent becomes normal practice in future ad limina visits.’