The Second International meeting of the Friends of Mary Ward, August 2017 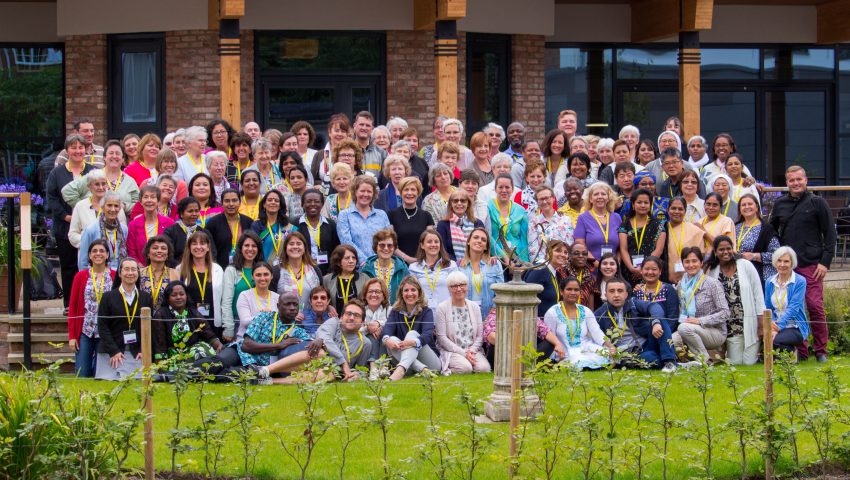 The Second International meeting of the Friends of Mary Ward, August 2017

The total numbers should have been 125 but, unfortunately, not all the participants we were expecting from Cuba, East Africa, Nepal and Zimbabwe were granted visas, which was most disappointing for them, and for us.

We were delighted that both General Superiors, Srs Jane Livesey CJ and Noelle Corscadden IBVM were able to be present throughout the conference as well as three members from the generalate teams in Rome.

A steering committee from within the group of the Friends in the UK had been set up in 2015 to plan the meeting. Planning for this number, across both branches of Mary Ward’s family, was a challenge of logistics, but the hard work paid off. The steering committee felt it was important, especially for participants who had never been to Mary Ward country, or who might never come again, to visit those places in Yorkshire closely associated with Mary Ward’s life. Visits, especially those planned within a spiritual context provide an opportunity to understand Mary Ward better, through being able to hear, see, touch and smell the places associated with Mary Ward.

On the first afternoon, in the pouring rain (an important element in any visit to Mary Ward’s country), we visited the Minster where a special tour had been laid on around ‘the catholicity of York Minster’; from there it was on to the Bar Convent where we arrived soaking wet to a very warm welcome. After a guided tour of the new Living Heritage Centre, we celebrated out opening Mass, thanks to our competent liturgists, and then we all enjoyed a buffet supper with members of the Bar Convent community.

There were small miracles along the way: the sun shone every subsequent day; we prayed at every stopping place as if on pilgrimage; Mary Ward met us in person; no one got lost, hurt, or was even late for the bus, and we had plenty of time for chatting, meeting new friends, and taking photographs and twittering.

On the last day Srs Jane and Noelle presented a joint appreciation of where Mary Ward’s Family is today (see more below), and Sr Liz Cotter (Vice-Postulator for the Cause of Mary Ward) gave us an informative account of her work on behalf of the whole Mary Ward family.

After the keynote addresses we had time for group discussions, sharing across national groupings, and deciding what and how we would take the experience of the week back home with us.

Copies of the talks (in English) can be found on this website in the ‘news’ section.

The title of the conference was: ‘Mary Ward, Prophetic Woman’. Guided and inspired by our excellent keynote speakers we were taken through ways in which Mary Ward was prophetic in her own times, which inspired one participant to share her description of Mary as ‘shockingly modern’. We touched on Mary’s ‘resilience’, on the ‘powerful networks’ she forged, on the ‘boundaries’ and ‘walls’ that cannot be allowed to stand in our way if we are to be authentic ‘bearers of a dangerous memory’.

In their joint reflection Srs Jane and Noelle focussed on the

encounter with Mary Ward we had experienced together; on the reality of our ‘oneness’ as the Family of Mary Ward, which we need to live out of rather than out of irrelevant categories of CJ or IBVM, religious or lay, by which we have traditionally identified ourselves; we were encouraged to ‘cherish God’s vocation in each other’ (to paraphrase Mary Ward’s words); and as family members to start looking up our ‘long lost relatives on the other side of Mary Ward’s family.

Where do we go next? That all depends on us, the 120 participants,  to take the experience back, to talk about it, share it, but most of all to live out of our new reality as ‘one family’ who ‘bear a dangerous memory’.