How to build a secret chapel: CJ/IBVM day explores the archives 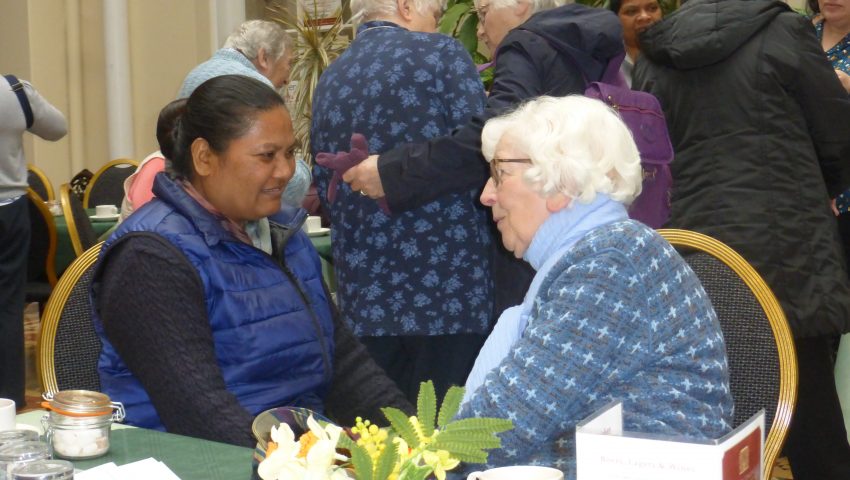 How do you build a secret chapel in a secret convent without the neighbours noticing? That’s one of the questions we explored at our annual ‘Links Plus’ day, which brings together CJ and IBVM sisters to strengthen connections between the two congregations, with a view to our future union.

In the morning we heard a paper by Dr Hannah Thomas on the links between Teresa Ball and the Bar Convent. Teresa Ball was at school at the Bar Convent as a child, and went on to make her novitiate here before returning to Ireland, where she founded the Loreto Rathfarnham community which was eventually to become the IBVM (Loreto) branch of Mary Ward’s institute.

In the afternoon we were joined by two MA students from York University, Hannah and Sarah, who shared with us the fruits of their research on the construction of the Bar Convent’s beautiful secret chapel, which celebrates its 250th anniversary this year. When the chapel was under construction in the 1760s it was illegal to build Catholic churches, and illegal for convents to exist, and so the project was shrouded in secrecy. General repairs and modifications to the house provided a screen for the chapel construction works, which involved an ambitious plan to construct a dome, hidden by a pitched roof. Lists of donors were kept, but the project was described in vague terms as ‘the building of our house’, and the donors sometimes chose to remain anonymous –if the authorities got hold of a list of Catholics contributing to the building of a chapel, the penalties could be serious. A sympathetic and discrete architect was found, and the chapel’s design included eight separate exits, so that the congregation could disperse quickly and in different directions, and a priest hole. Mother Ann Aspinal, superior at the time of the chapel’s construction, wrote in a letter at the time:

‘…there are many persons who have expressed dissatisfaction about our building. They are very curious to know whether we are nuns or not, believing if we are we ought not to remain here. They suspect our house is a convent, and it is contrary to the laws for one to exist. I hope our enemies will not be able to prove anything against us.’

The chapel opened in 1769. Although the Catholic Relief Act, which followed shortly after in 1771, allowed for it to registered as a place of worship, Ann Aspinal is still described in the licence document as ‘spinster’: it would still be some years before the convent could openly declare itself as such.

Thanks to the organising team, our archivist Dr Hannah Thomas and Sarah and Hannah from York University for a fascinating day. You can learn more about our archives and special collections here.