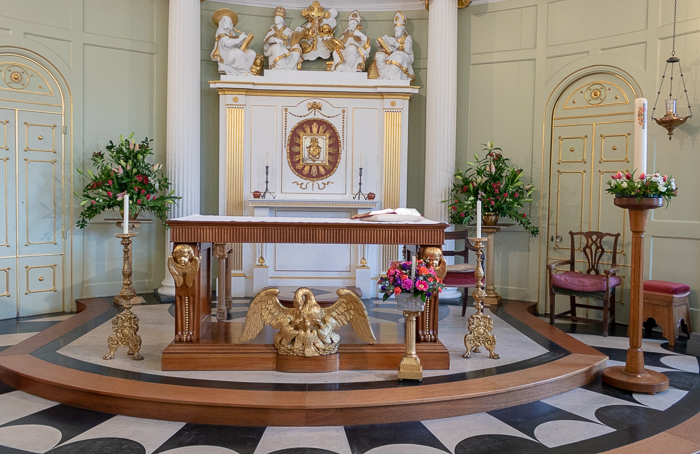 Saturday April 27, 2019 marked the 250th anniversary of the opening of the Bar Convent’s stunning hidden chapel. The chapel, commissioned by Mother Ann Aspinal, was begun in the 1760s. It was decided early on in the planning that the chapel should feature a dome, but the religious turbulence of the period meant that the dome –as well as the building work itself– needed to be concealed from public view. The dome was cleverly constructed, hidden underneath the pitched roof, and the chapel also featured eight separate exists and a priest’s hole, thus allowing a swift exit for the priest, sisters and congregation in the event of a raid by the authorities.

We marked this occasion by a special Mass presided by Bishop Terence Drainey.

The Mass and celebration that followed was well attended by many CJ and IBVM sisters including both General Superiors as well as many past pupils, teachers, priests and friends of the Bar Convent from York and all over the world. Mass was followed by a wonderful buffet lunch and visitors were welcomed to visit the special display on the chapel inside the Bar Convent Exhibition.

A symposium on the history of the chapel was also held at the Bar Convent on Friday April 26. Dr. Jan Graffius, curator at Stonyhurst College, presented the relics from the Bar Convent and the wider English recusant community. Professor Bill Sheils brought to life the various uses of the Bar Convent Chapel for the people of York and beyond. Professor Maurice Whitehead spoke about the opening of the Chapel in troubled times and Professor Deirdre Raftery presented the rich array of Mary Ward’s Irish daughters from M. Teresa Ball to M. Michael Corcoran.

More pictures are available on our Gallery page, and you can download Bishop Drainey’s homily here.