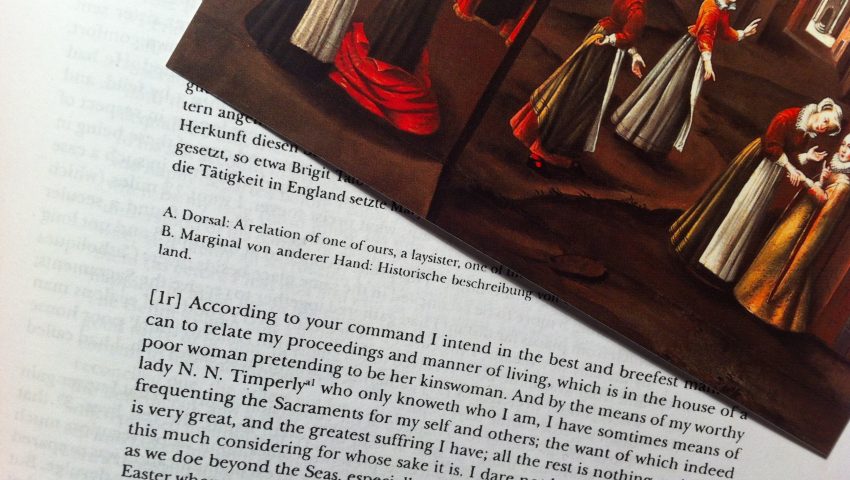 On Saturday 23rd February, some of the Friends of Mary Ward group met with Sr Magdalen O’Neill IBVM to explore ‘Sister Dorothea’s Narrative’. It’s a fascinating text, written by one of the early companions of Mary Ward working in the Catholic underground in East Anglia in the 1620s. As well as giving a fascinating insight into the practical aspects of ministry during the recusant period, it also shows how Mary Ward’s sisters understood their mission. One of the study day participants writes,

‘Four Friends of Mary Ward had the joy of reading ‘Sister Dorothea’s Narrative’ of 1623 with the expert guidance of Sr Magdalen O’Neill IBVM. We were fascinated to learn how one of Mary Ward’s sisters worked very much as Mary herself had done in London – gaining the confidence, respect and affection of families before teaching them about the faith. It provided a remarkable insight into the day-to-day life of an English recusant in East Anglia, operating incognita, not only avoiding detection from the authorities but also fully aware of the need for caution because of the opposition to Mary Ward’s Institute among certain sectors of the English Catholic clergy. The narrative brings Dorothea alive as someone who recognised that she was living the apostolic life of contemplation in action that was the vision of both Mary Ward and St Ignatius. She was a remarkable woman working mostly alone on the dangerous English mission and relying on her faith in God and the inner resources He gave her. It was a most illuminating day.’

The narrative begins with a summary of Sr Dorothea’s ministry:

‘According to your command I intend in the best and briefest manner I can to relate my proceedings and manner of living, which is in the house of a poor woman pretending to be her kinswoman. And by the means of my worthy lady Timperly, who only knoweth who I am, I have sometimes means of frequenting the Sacraments for my self and others; the want of which indeed is very great, and the greatest suffering I have; all the rest is nothing, neither is this much considering for whose sake it is. I dare not keep schools publicly…but I teach and instruct children in the houses of their parents, which I find to be a very good way, and by that occasion I get acquaintance, and so gaining first the affections of their parents, after with more facility their souls are converted to God.’

You can find out more about the Friends of Mary Ward here.