Bloom Where You’re Planted: A Reflection by Gemma Simmonds CJ 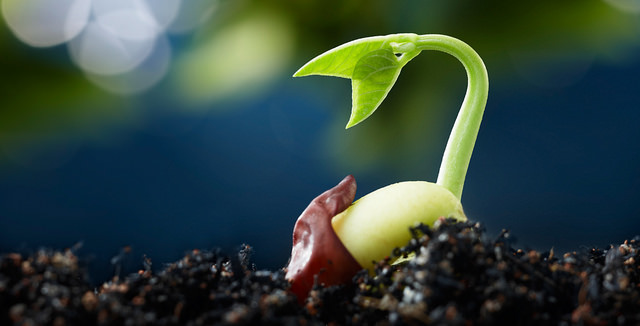 Again he began to teach beside the lake. Such a very large crowd gathered around him that he got into a boat on the lake and sat there, while the whole crowd was beside the lake on the land. He began to teach them many things in parables, and in his teaching he said to them: ‘Listen! A sower went out to sow. And as he sowed, some seed fell on the path, and the birds came and ate it up. Other seed fell on rocky ground, where it did not have much soil, and it sprang up quickly, since it had no depth of soil. And when the sun rose, it was scorched; and since it had no root, it withered away. Other seed fell among thorns, and the thorns grew up and choked it, and it yielded no grain. Other seed fell into good soil and brought forth grain, growing up and increasing and yielding thirty and sixty and a hundredfold.’ And he said, ‘Let anyone with ears to hear listen!’

Some years ago there was a fashion for posters that read “Bloom where you’re planted”. It was an encouragement not to be afraid to be different but to value our own gifts and whatever makes each one a special ‘me’ . There’s a lot to be said for learning to value ourselves as we are rather than trying to be what popular opinion dictates we should be. But it does require us to know ourselves as we are and to learn to cherish God’s gifts in us as God also cherishes them.

Jesus tells us that the seed of the parable is the word. The word is his message to us and to the world. But God also has a word given only to us. God calls each of us by name, and that word is our own identity that God sees, knows and loves. Our task is to hear that living word of love – God’s particular dream for us – and allow it to become flesh in our lives. There are many fears and illusions, anxieties and false preoccupations that prevent that word coming to fruition.

Our primary vocation comes from our baptism, in which we are given a share in Jesus’ ministry as prophet, priest and king. The challenge to us is to understand how to give that grace house room, and live it out in the power of the Spirit. The first step is to have faith in the seed that God has sown.