Trust the Artist: A Reflection by Gemma Simmonds CJ 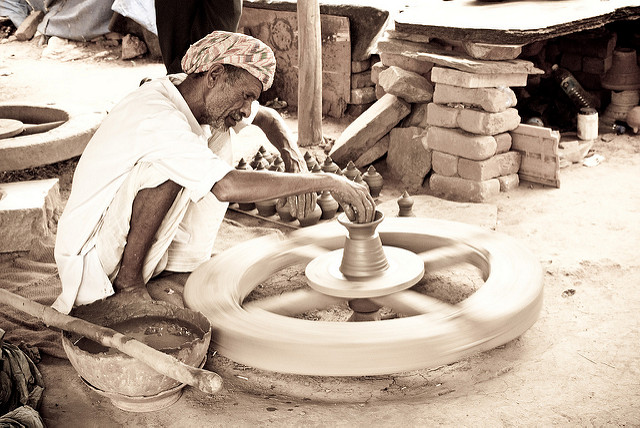 Human beings have been making pottery since prehistoric times. Pottery predates agriculture, and remnants of ancient pottery have been found from over twenty-five thousand years ago. The pottery wheel was invented between 6,000-4,000 BC, and revolutionized the industry. It would seem that from our earliest history we have been working out different ways to mould clay to our liking.

Anyone who has ever tried working with a potter’s wheel knows that for success there needs to be a combination of the right speed, the right consistency of clay, the right amount of water and a steady hand. Pottery looks easy to someone watching, but requires a variety of skills for mastery. The lucky thing is that mistakes can be rectified by starting over again. What is fascinating to the onlooker is seeing something that looks like a shapeless lump slowly turning into a beautiful vase or bowl. The artistry is in the hands but also the imagination of the potter.

Jeremiah’s visit to the potter gives him an understanding of the way in which we are formed, as individuals and as a people of faith, by God’s dream for what we can be. In his own context the story is about God reforming a people who had gone astray. But in our daily lives it is also about knowing that God has the artistry to draw out of us each day all that is best within us, if only we have the trust to put ourselves into the artist’s hands.