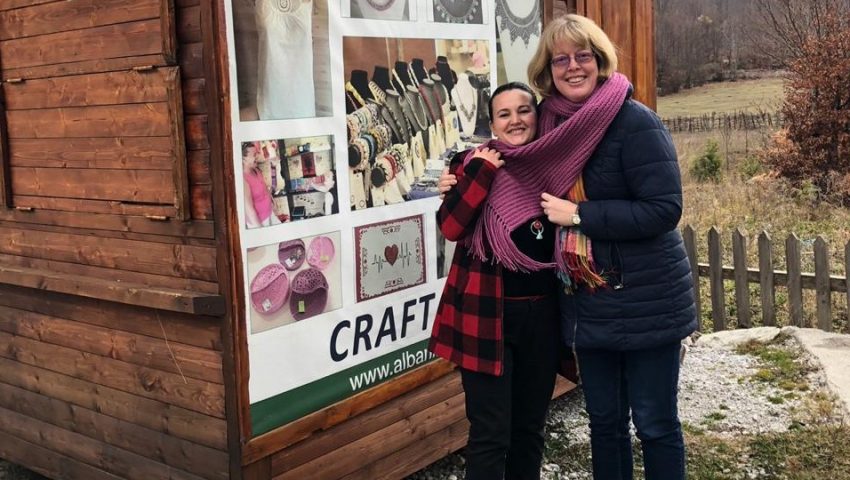 Part of every CJ sister’s formation in the novitiate are ‘experiments’, or mission placements. These help the sister in formation to experience different areas of ministry, discover more about her strengths and where God is calling her. Sr Marion Bettenworth has recently returned from an experiment in Albania working with the Mary Ward Loreto Foundation. This is her story!

Albania is a country of many contrasts! It is stunningly beautiful with high mountains in the North and beautiful beaches in the South and the people I met were very

friendly, warm-hearted and hospitable. And yet it is also, especially in the rural areas, still a very patriarchal society with a high level of domestic violence and situations of real poverty and destitution.  There is also a pervading sense of hopelessness and lack of confidence in the government – and many people (especially the young) just want to leave and build a new life elsewhere.

This is the context in which the Mary Ward Loreto Foundation (MWL) operates. MWL was founded by Sr Imelda Poole IBVM and initially focused on working with women and girls to end trafficking and exploitation by training, assisting and empowering them. This involves practical help, creating sustainable economic

opportunities for them and giving formation on many different levels. At present MWL runs a variety of projects and centres in different regions of the country. More recently MWL has started several education and formation projects for young people and are also working with the men in the villages. Throughout my stay, I was really impressed by the commitment and professionalism of the MWL staff, often young women themselves, to work for change in very challenging situations.

Right from the start it was an exercise in flexibility: I was meant to be based in Lezhe for the whole of my stay. However, on the day I arrived, the local MWL social worker had to have an emergency operation on her spine. Fortunately, she made a full recovery, but it meant that she was out of action for a while and my program had to be changed. And so, after 12 days in Lezhe, I travelled up to Tropoja, a district in the very north of Albania, high in the Albanian Alps and close to the border to Kosovo, where

MWL has another centre. I stayed there for three weeks and then, after a couple of days in Tirana, I went to a village in the very south, near the Greek border, where people were busy harvesting mandarins. I was very fortunate to see a lot more of the country and the work of MWL than originally planned!

In many ways, my time in Albania was also a real mission experience. As they are so remote, the villages in the North had remained largely Catholic during Ottoman rule. However, during communism Albania was officially declared an atheist state and the church was more or less destroyed –38 Albanian martyrs were beatified in 2016. In Tropoja, for example, there was no priest in the entire district – on Saturday and Sunday afternoon a priest came over from Kosovo to say mass in two of the villages. The three Franciscan sisters I was staying with were the only Religious in the area, and really kept the local Church going by holding weekly catechism classes and Eucharistic services in the surrounding villages.

My stay in Albania has made me realise how many things I have always taken for granted: equal rights for women, access to (higher) education, a reliable public transport system, adequate heating in the houses… Life in Albania is very different! However, I was constantly amazed by the friendliness and hospitality of the people I met and visited. Even though I never made much progress with the Albanian language (which is, as several people told me, one of the most difficult languages in the world), I was able to communicate with people – sometimes in English, but more often with gestures and a smile.

And, yes, I strongly felt God’s presence in Albania – among the people praying in the freezing village churches, the children singing and dancing, the religious working with so much dedication in the service of their mission, and in that sense of connection and solidarity that I often felt in the encounter with ordinary people.’