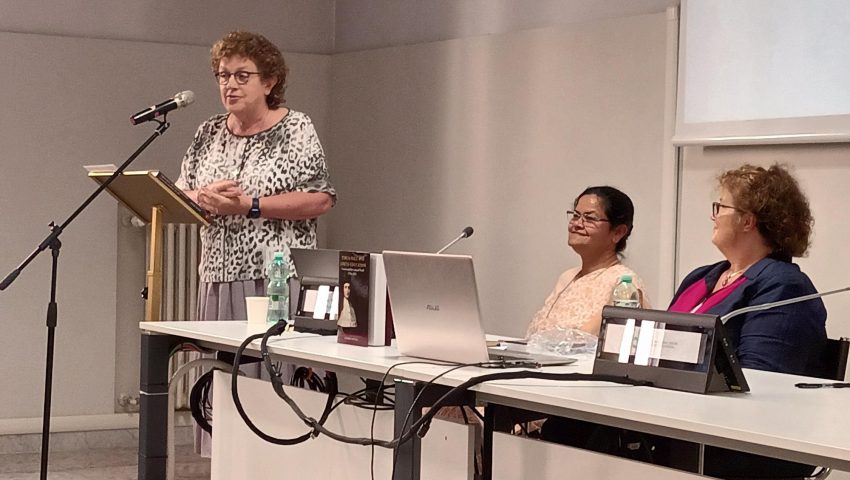 Book launch in Rome, 19 May 2022, to celebrate the bicentenary of the foundation of the IBVM Loreto’s. ‘Teresa Ball and Loreto Education, Convents and the Colonial World 1794-1875 by Deirdre Raftery.

About fifty of us attended the official launch of Deirdre Raftery’s new book on Teresa Ball held at the UISG Centre in Rome on the afternoon of Thursday, 19 May 2022. The ‘us’ were the IBVM and CJ Generalate teams; representative members of the two congregations from Ireland, England (Srs Ann and Frances from York), Spain, and Canada, along with some of the Friends of Mary Ward; students resident in the Rome community; technical staff from UISG kindly provided by Sr Pat Murray; the Irish ambassador; a handful of ‘stray’ sisters from both branches who happened to be in Rome and were delighted to be invited to join in, and the almost one thousand IBVM/CJ sisters and school pupils were with us via Zoom and YouTube from across the globe. Quite a crowd!

Deirdre Raftery’s new book, specially commissioned for the 200-year anniversary of the foundation of Teresa Ball’s institute, has a long title: ‘Teresa Ball and Loreto Education, Convents and the Colonial World 1794-1875’. Deirdre filled us in on her research across the globe which was considerably longer even than the title of the book.  The depths of her research showed in her outstanding presentation. She focussed on the early part of the foundation, Teresa Ball’s background in Dublin, her schooling at the Bar Convent in York, and enabled us to see how her strength and inspirational leadership emerged from this early formation.

Deirdre is presently the Professor of Education at University College in Dublin and her mastery of the story of Teresa Ball, showed through. There was never a dull moment as we marvelled at her delivery, her understanding, and her strong admiration for her subject. After a session for questions in which those who joined us via Zoom joined in, Noelle Corscadden gave a very warm and appreciative vote of thanks on behalf of all of us. We then had the privilege of listening to a beautiful song written by two seventeen-year-old pupils, Siabh and Siofra, from the Loreto School in Kilkenny. The song called ‘SHE’ was composed in honour of Teresa Ball, and Loreto pupils from across the world joined in the singing and orchestration. It was a very moving experience. We then had a difficult choice to make, head for tea, or pick up a free copy of the book and join the queue for it to be signed by the author. Most of us managed both.

It was heartening to hear Deirdre speak of the Bar Convent as ‘the birthplace of Teresa Ball’s vocation’ and to learn that she left Rathfarnham for Dalkey at the end of her life so that she could gaze across the sea in the direction of all those sisters who she had sent on mission and would never see again. Her gaze also stretched towards York and the place where she had found her vocation as a companion of Mary Ward. In the evening we all attended a delightful supper at Casa Loreto which ended in Irish singing. A day to remember as we work towards ‘Becoming One’ Mary Ward institute.