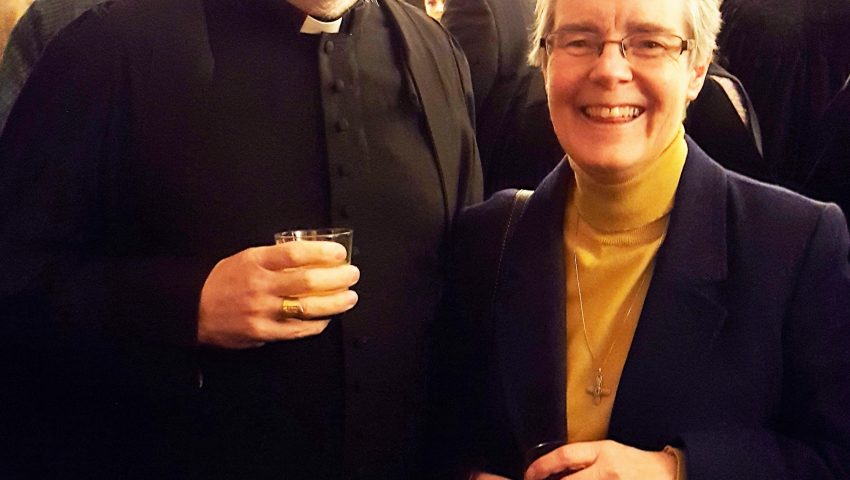 The title given to me by the chaplain for my homily this evening was “Knowing God” and it immediately reminded me that the first spiritual classic I ever remember reading, because there happened to be a copy of it in our house, was “The Cloud of Unknowing”, a spiritual classic by an unknown author, dating from the second half of the 14th century.  I must admit that I have not read it for a long time and at the time found it quite hard going, but I remember even then understanding at least something of what the author was talking about – that knowing God is, in fact not within our grasp, but striving to know Him is one of the tasks of the Christian life.  The question is, how to set about it?

In “The Cloud of Unknowing” the author counsels the reader (of whom presumably there were not too many in the second half of the 14th century), to seek God and to seek to know him not through the intellect but through prayer and with what he calls a “dart of longing love” which will pierce through the eponymous cloud because, as he says, God “can be well loved, but he cannot be thought”.  If this was one of those clever apocryphal Oxbridge entrance essays where the brilliant candidate answers the question in one sentence and puts down his or her pen, this homily would probably stop there.  But my sense is that the chaplain might feel that the college had been short-changed – at least at this juncture – if I were to leave it at that, so I will endeavour to “unpack” a bit more what it might mean to say that God “can be well loved, but he cannot be thought”.

The first lesson this evening, from the book of Lamentations, has a signpost in the same direction as the Cloud when the author writes that “The Lord is good unto them that wait for him, to the soul that seeketh him” and, later, “Let us lift up our heart with our hands unto God in the heavens”.  What the two authors, separated by about one thousand eight hundred years, both understood, is that we will never know God because He is, and will always be, beyond our knowledge, beyond our human horizons, but that, for those of us who have faith, it is a central aspect of our being human to seek to know Him.  And the path of seeking that knowledge is, as St Paul says in the second lesson, a path that is walked by faith and not by sight.

As human beings we can only feel our way towards knowing God, seeing through the glass darkly, as St Paul puts it in his first letter to the Corinthians, catching glimpses of Him now and then in the scripture of our own lives.  And for myself, that is the only way that I can come to know God better, by being attentive to Him in His actions in my own life.  The spiritual tradition from which I come is the tradition of St Ignatius of Loyola, a man who does not always get a good press either inside or outside the Christian tradition but who I think may be benefiting a little these days from the “Francis” effect of our current Pope, himself formed, as a Jesuit, in the tradition of the Spiritual Exercises of St Ignatius.

In the Spiritual Exercises, which are better experienced than read, St Ignatius teaches us to find God, and come to know him better, through meditating on the sacred scripture and seeing how and where that scripture meets the scripture of our own lives – “finding God in all things” as he puts it.  It is a tradition that does not compartmentalise our lives into the sacred and the secular – Church and God for Sundays, ordinary life for the rest of the week.  And as with any other kind of knowledge, the knowledge of God’s working in our lives only comes with attentiveness, an attentiveness that we have to practise on a daily basis. Ignatius offers us a tool for forging that attentiveness, what he calls the Examen of Conscience, these days more usually called the Examen of Consciousness.  This is the practice of calling to mind and heart on a regular basis – preferably daily – the events of my life in order to better understand how and where and in whom God has been present to me during it.  Because God is not going to be present to me – not going to be known to me – other than through my own life.  So if I try to know and understand what is happening in my own life it will almost certainly help me in that feeling of my way to knowing Him better – and, of course, to loving Him more.  Because, quite honestly, knowing God is only one half of the equation and pretty pointless without the other half, which is loving Him and loving His creatures and his creation.

I think that the understanding that seeking to know God and loving Him are inextricable is what attracted me to the Cloud of Unknowing all those years ago – the author articulated something for me that I could not articulate for myself at the age of probably 13 or 14, and indeed struggle to articulate in my life even now – not to articulate it in words, that’s the easy bit, but to articulate it in terms of how I live my life and in particular how I manage, or don’t manage, the struggles and the difficulties that come with the human condition and with what in the Christian tradition we call original sin.  Here is what the author of the Cloud says about how to do that. He says, that “though it may be good at times to think (nb think) specifically of the kindness and excellence of God, and though this may be a light and a part of contemplation [the striving to know God in what we call prayer], at the same time, in the work of contemplation, it [thinking] must be cast down and covered with a cloud of forgetting.  And you must step above it stoutly and deftly, with a devout and delightful stirring of love…and beat at that thick cloud of unknowing with a sharp dart of longing love” and, very very important, this next bit, “do not give up, whatever happens”.

Do not give up, whatever happens – what an essential part of Christian virtue and the endeavour to know and love God, is not giving up.  One of my favourite sayings is this: “With patience, perseverance and a bottle of sweet oil, the snail at length reaches Jerusalem”.  Perseverance is a very under-rated virtue but such an important one if we want to “reach Jerusalem”, whatever reaching Jerusalem means for each of us.  But for those of us for whom the search for God is an integral part of our journey and the Jerusalem which is its destination, the author of the Cloud is surely right to urge us never to give up, however tempting it is on occasion.

And here I am reminded of someone who is very important in my own attempt never to give up and who is a shining example of what it means to persevere.  Her name is Mary Ward, a Yorkshirewoman and the foundress of my own congregation, who in the early seventeenth century was given every opportunity by the Catholic Church to practise both patience and perseverance.

She was originally an enclosed nun at a time when that was all that was on offer for women in the Catholic Church who wished to devote their whole lives to God but God showed her that there was another option.  This was a way of life for women that mirrored that of the Jesuits – unenclosed, serving Him by doing good in the world by responding to the needs of the times and in particular addressing one of the most urgent needs of those times (and still in many parts of the world in our own times)  – the education of girls.  For her pains she incurred the opprobrium of the Church.  She was even imprisoned, and had the distinction of a Papal Bull all to herself, suppressing her institute and confirming her a heretic.  But somehow she managed to find the most delicate of balances, loyalty to the Church but loyalty also to what she knew to be the will of God for her –  she never gave up on that or on Him.  I could preach another homily on her – on her courage, her perseverance, her constant search to know and do the will of God – but I am not going to.  I just want to quote some words of hers that mirror those of the Cloud and those of the third chapter of Lamentations. They were written during one of her retreats, probably in the second decade of the 1600s.  During her prayer she hears this invitation – “Go close to Him.  It is easy to kneel down, not very difficult to look on him and even less difficult to tell him what you are thinking”.  How better to get to know him?  Later in her retreat notes she writes, “I said, My God, what are Thou?” – the fundamental question asked in different ways by all of us who seek to know Him.  She then follows the question with the most wonderful response: “I saw him immediately and very clearly go into my heart and little by little hide himself in it. He held my heart”.

If we allow God to enter and hold our hearts we will surely know Him and love Him better and, as importantly, know that He knows and loves us and that we are, as St Paul said to us this evening “accepted of him”.