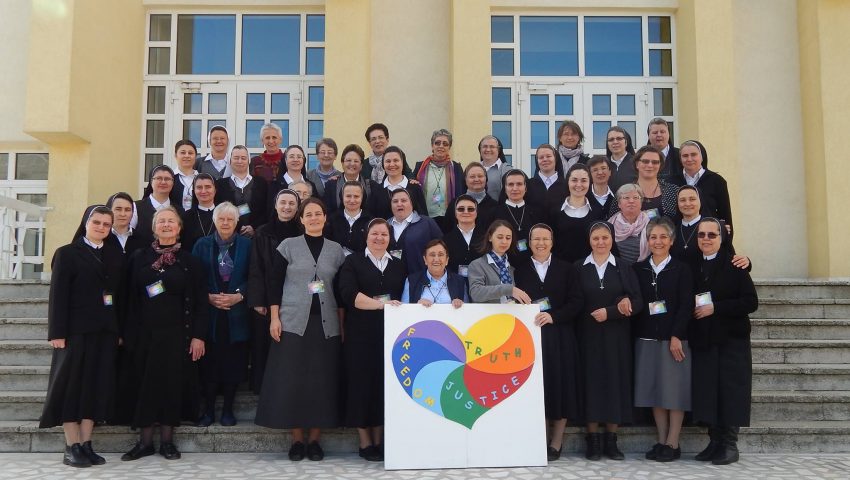 Sr Martha Zechmeister CJ from Austria who has been in ministry in El Salvador for many years spoke on ‘Universal Mission: The Core of Our Charism’ – and Sr Anna Quinterio CJ from Italy, who has just returned from the CJ Mission in Cuba, on ‘Living and Serving in a Multicultural Community’. The input was enlightening and informative, giving all a realistic picture of living together in community with sisters and companions from many different cultures, and the inspiration and the challenges it brings. About 40 people were present. There was a focus on working in smaller groups, again with mixed traditions and languages, sharing experiences, hopes and facing reality in difficult situations.

Sr Elena Gatica CJ, our Vicar General from Rome, spoke about looking strategically at moving away from province-bound ministry to universal mission regarding both people and geography. The logo for the conference, a multicoloured heart with Justice, Freedom and Truth said it all: we come with open hearts in freedom, to do God’s will in our global contemporary surroundings.

After the Conference, Patricia and Mary stayed for a few days longer to see something of current ministries of the Romanian Province, visiting CJ projects in Bucharest – kindergartens, parish social work, a safe house for trafficked and abused women and their children, and an old people’s home – and a large Don Orione house for old people, autistic and mentally-handicapped children, and some orphans, where a CJ community shares the work. They took part in a service on All Souls’ day, in the city cemetery for all the Romanian sisters who had died, including the sisters who had died in prison or suffered torture for their constancy during Communist times – and also managed visits to Dracula’s Castle (!), the Village Museum, the Cathedral, the Nunciature and several beautiful Orthodox monasteries and churches.

They are both very grateful to Sr Pilar, the CJ Spanish Provincial and her team for the organisation of the weekend conference, and to Sr Patricia, the CJ Romanian Provincial and all the sisters for the love, hospitality and time which they gave so generously.