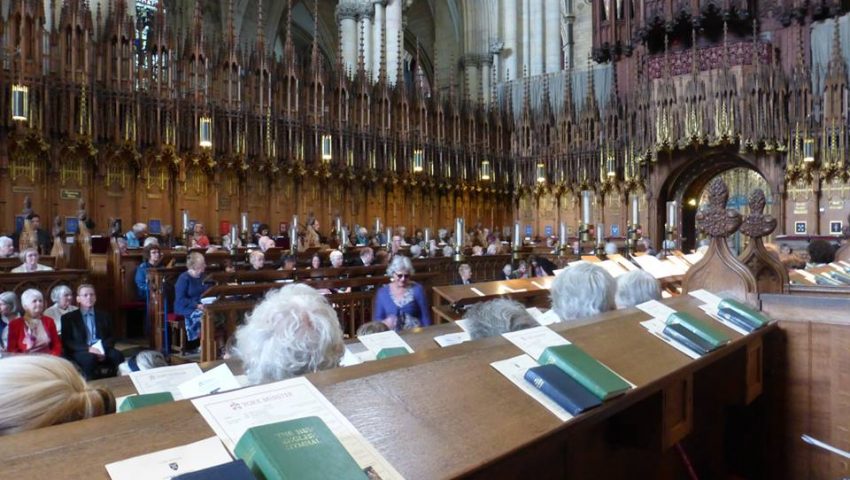 On Monday 3rd July 2017 some 450 people gathered in the ‘quire’ of York Minster to give thanks for the gifts of Cecilia Goodman, who had touched their own lives in many ways through her varied ministries in teaching, formation, leadership and spirituality.

The service was structured to begin and end with pray and song, wrapped around a series of reflections by members of Cecilia’s birth family, CJ family, and spirituality colleagues and friends which recalled her various gifts.  These were interspersed with verses of Cecilia’s favourite song, ‘Jesus Christ the Appletree’ (Ingalls setting), sung by a small choir drawn from the CJ and people involved with St Bede’s. (This song can be heard in the Ingalls setting at https://www.youtube.com/watch?v=3cXy2TtewHI).  A homily on the parable of the mustard seed was given by Antony Lester OCarm, a long-time friend of the York CJ community.  The texts of all these reflections can be found below and in the following two posts.

Everyone was invited to go to the Bar Convent afterwards for tea and scones in the garden, and the sun shone beautifully for us.

Grateful thanks are due to the Minster staff for allowing us to use the space, to the York community for hosting tea, and to the organisers for the loving care they put into making it a beautiful, spiritual thanksgiving.

CECILIA’S GIFTS TO HER FAMILY, a reflection by Ariane Bankes

Our sister Cecilia was a born teacher, and my brother Mark and I were the first beneficiaries – she taught us almost everything we learned as children. She was six years older than me, and I suppose she must have seemed very grown-up from our child’s eye perspective. But she perfectly bridged the gap between us and the grown-up world; her age gave her a natural authority, and we would sometimes tease her about her ‘bossiness’ – yet she threw herself headlong into our lives and our enthusiasms, she never talked down to us or patronised us, and every hour we spent with her was filled with discovery and all the fun that entails – we could hardly wait for her to return from boarding school. She taught us how to fish, to row the old boat on the local canal and fight off the swans, to climb trees, to make dens out of brushwood, to start fires from almost nothing, to cook charred sausages on those fires or bake potatoes to cindery but delicious blackened balls in the ashes, to swim – she was an indefatigable and fearless swimmer herself – and to write in copperplate italic, and that was just the start. …

As many of you will know, she was a talented and passionate photographer, with a profound sense of beauty and the natural world, and I think that love of photography might have stemmed from the moment our parents gave her for her twelfth birthday a proper microscope, and she spent hours with us trapping shavings of leaf or petal, or fish scales or rabbit whiskers between two plates of glass and peering at the wonders her microscope revealed  – it was a revelation to us, and it blossomed for her into a passion for nature in all its forms.

Above all, she was always able to enter in our world with complete understanding and empathy – qualities that not only made her the wonderful teacher she subsequently became, but contributed to the remarkable insight and wisdom that she brought to everything she undertook, and to the deeply supportive relationships she had with friends and colleagues throughout her life. I came across the following thoughts on a life well lived, attributed to Ralph Waldo Emerson, which I think could have been written about Cecilia, and I’d like to share it with you:

What is Success?  To laugh often and love much; to win the respect of intelligent persons and the affection of children; to earn the approbation of honest critics and to endure the betrayal of false friends; to appreciate beauty; to find the best in others; to give one’s self; to leave the world a bit better, whether by a healthy child, a garden patch or a redeemed social condition; to have played and laughed with enthusiasm and sung with exultation’ to know even one life has breathed easier because you havelived; this is to have succeeded.

CECILIA’S GIFTEDNESS AS A  TEACHER by Ann Stafford CJ

Cecilia was an inspiring teacher.  We have heard how she taught her younger sister and brother all sorts of exciting things during her school holidays, and when she decided to enter the Institute of the Blessed Virgin Mary – as the Congregation of Jesus was then known – she developed her natural gifts to become a brilliant and much-loved teacher at our school in Shaftesbury.  She took the name of Daniel because it seemed to her the most exciting book of the Bible! – and excitement was what she breathed into the lessons she taught.

Tributes from some of her pupils show that she had both their affection and their respect – not least because she made the biology lessons such fun, but also because she joined in their interests: she had hutches constructed for their guinea pigs, which she visited as frequently as the children did; and she is remembered for playing football in wellies!

Cecilia’s own difficult childhood made her understand troubled girls, and they found in her a compassionate listener and support.   Her careful guidance of them was a huge benefit for girls and school alike.

Cecilia loved nature and took pupils to the Lake District during the school holidays, opening to them new life experiences and areas of wonder and beauty to expand their horizons.  With her love of nature, her gift for photography had wonderful scope around the beautifully situated school.  She extended this gift to the pupils and with her ingenuity for using hidden spaces, she set up a processing room for the girls to develop their own black and white photographs.  The results were amazing, Cecilia delighting with them in their achievements.

While these gifts and skills were directed to the children, her work as a member of a team of teachers who had full-time care of the girls was deeply appreciated equally by her community of sisters.  So as CJ sisters we give thanks for the boundless energy, the creativity, the compassion and the freedom that were the hallmarks of her years as a teacher in our schools – a profession she delighted in for many years.  Although Cecilia eventually left school teaching to move into the world of spirituality, she continued teaching to the day of her death.

Cecilia was a natural leader in many spheres, through her gifts of creativity, organisingi skills, love of people, and spiritual insight.  So, in earlier years, she organised and led annual trips to the Lake District for Middle School children, a memorable camping holiday in Cornwall for a number of her religious sisters, and inter-congregational courses for novices.  Leadership of a formal and more exacting kind came in 1997-2003, when she was called to be Provincial. The province was larger then – there were 64 members at the end of her time in office, living and working in more places – but she was in frequent contact, taking a close interest in all that was going on, with special care for those working in smaller groups in Hull and Middlesbrough, away from the well-established communities.  She had a gift for encouraging people and making them feel that they and their ministry were valued.  she was notable for her wise and humane dealings with individuals, even in painful and difficult situations, of which there were several during those years. Here, her sound judgment of issues, and especially her clear sense of the priority of God’s call for both the individual and the province, were intimately linked with her own experience of prayer and spiritual discernment, and with what she had learned through working in spiritual direction and formation.  Despite some times of general sorrow, her years in office were a stable and well-supported period. In later years she was still a leader, both in the province and in community, through her wisdom and experience, and perhaps not least through the zest for life which she never lost.

Formation – that is, the long process of accompanying supporting and training new members – is vital to the CJ.  Cecilia was a key part of the English province formation process from 1987, when she became novice director with one novice, with more arriving over the next four years. Her gifts were such that she was asked to resume the role on two later occasions, and at her death, she was director of novices here in York.

During these years she took part in many international CJ initiatives looking at the best ways to support younger members in formation, and those with responsibility for accompanying them; she also played a key role in organising and delivering inter-congregational courses in London for novices, when such initiatives were still in their early stages.

Cecilia was eminently suited to the task of guiding and introducing new members into the Congregation of Jesus.  She was unshockable and direct in approach, honest, and wise; she could affirm while challenging – not an easy combination – often saying that her task was ‘to give the novices a safe space to thrash around in.’

Even to her new novices, it was evident that her natural insight and wise judgement were rooted in her own relationship with God and in prayer.  She had an intuitive understanding of psyche and spirit that enabled her to be quite outrageous on occasion – but her challenges were always accompanied by affection, and her belief that the person could rise to them.

Cecilia was a woman with a great sense of humour; a memorable phrase of hers when facing someone with a demanding situation was ‘it will be good for you!’ It usually was, but often in a way obvious only to Cecilia at the time.

In more recent years she played an important part in the province team responsible for working with our newer members.  We valued her long experience and the way that it seemed she could sometimes see directly into the hearts of those she accompanied.

It is a profound experience to have ones’ heart ‘seen’ in that way, and her absence has left many of us missing a colleague, a friend and a soul companion.