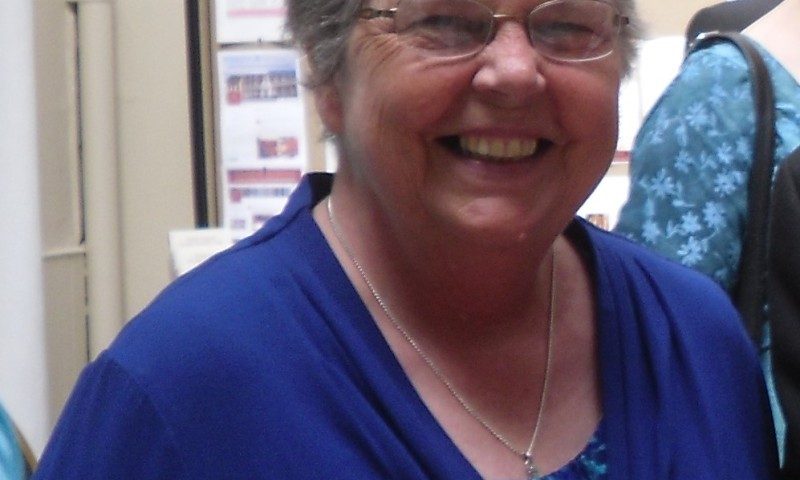 Cecilia Goodman died suddenly on Sunday 26th February 2017 at the Bar Convent, York.   A private funeral was held at the Bar Convent on Monday 20th March 2017.  The full text of the tribute given at the funeral by Sister Frances Orchard, Provincial Superior, can be found below.  A memorial service will be held later in the year; details will be given on this website and on our Facebook page when the date has been fixed. 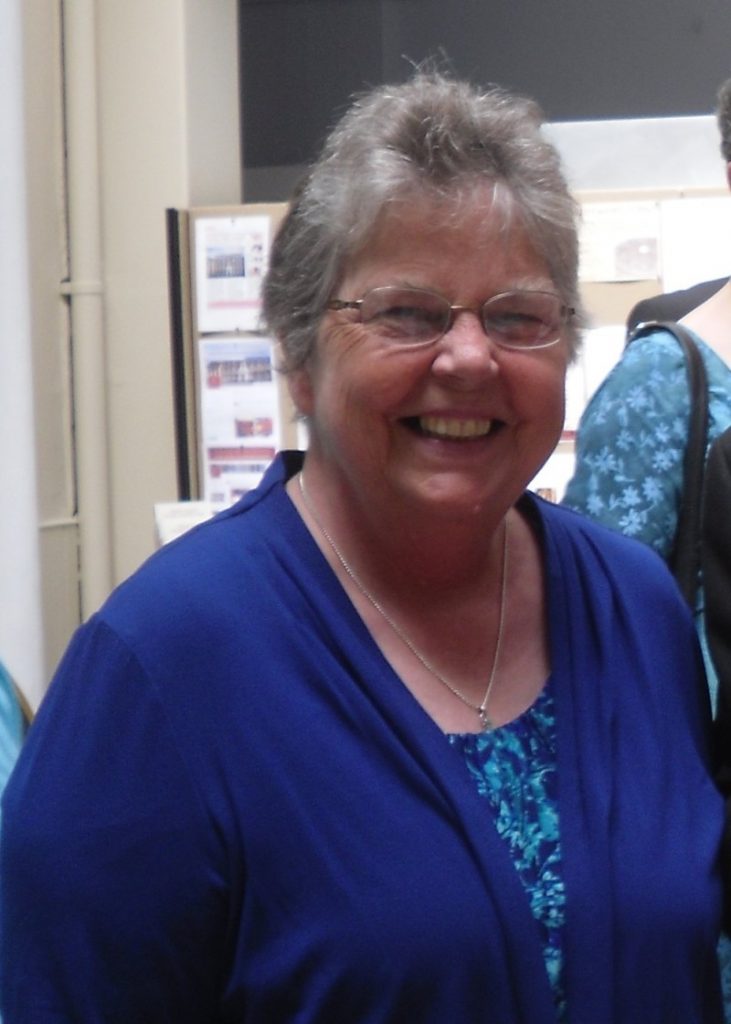 “Cecilia Goodman was born in Tokyo on the 11 February 1949 to a Polish mother, Nicoline and her British husband Arthur. Cecilia died suddenly and unexpectedly here on the 26 February just a few days after her 68th birthday. All of us will remember the sense of shock and disbelief we felt on receiving that news, followed by the enormity of the loss in our hearts and in our lives, and in the lives of all those she touched.

My task now is to recall her diverse and rich life, her many gifts spiritual and human, and to help us to say farewell to this remarkable woman as she journeys in faith into the total joy of God’s presence.

Cecilia’s childhood was complicated by the early death of her mother and the subsequent death of her father and she was sent off to boarding school at St Mary’s Shaftesbury at the age of 12, where her aunt, Sr Clare Goodman, who died only last year, was the headmistress. To school friends she is best known as ‘Toots’.  As a child she loved the glorious countryside, the wilderness, the risky freedom which she used to full advantage engineering fire alarms and escaping with lightning rapidity into the rhododendron bushes. Lessons often bored her but at weekends Sr Felicity would take a group into the woods to find rare insects, and this just happened to require a journey past the sweet shop. During one lesson she is remembered for dancing a defiant Scottish reel on the table under the pretext of opening the window. This streak of subversiveness in Cecilia was always just below the surface.

Her siblings could not wait for her to return from school for the holidays. This for them was when the fun began. Her half-sister Ariane writes of her:

she taught us how to fish, to row the old boat on the local canal, to climb trees, to make dens out of brushwood, to start fires from almost nothing, to cook charred sausages on those fires or bake potatoes to cindery but delicious blackened balls in the ashes, to swim – she was an indefatigable and fearless swimmer herself – and to write in copperplate italic, and that was just the start. I think her love of photography might have stemmed from the moment our parents gave her for her twelfth birthday a proper microscope, and she spent hours with us trapping bits of leaf or petal, or fish scales or rabbit whiskers between two plates of glass and peering at the wonders her microscope revealed  – it certainly fuelled her love of the natural world and her eye for beauty, both of which fed into her great talent for photography. Above all, she was a wonderful teacher because she cared so much about us, and was determined to share with us all the best in life – which she continued to do, enhancing the lives of countless others.

‘A wonderful teacher because she cared so much about us, and was determined to share with us all the best in life is the Cecilia we know and love and miss.

After leaving school she went inter-railing around Europe with a group of school friends. This gave her a taste for organising holidays which she did with consummate skill, regaling her friends and later her community with hilarious escapades.

She joined the Congregation of Jesus (then the IBVM) soon after leaving school. After her novitiate she trained as a teacher of Geography which gave her every excuse to apply her gift for out-of-classroom teaching when she was sent back to Shaftesbury. She taught there for thirteen years from 1973-1986 and loved every moment of it. Her favourite places were the Photography cupboard where she shared her love and creative skills with enthusiastic pupils, and the Biology lab which was well supplied with gerbils, mice, hamsters, locusts, stick insects. It was during this time that she rescued and nurtured an abandoned badger named Bran, who became a great favourite with the community with the notable exception of Sr Gregory who considered badgers dangerous. It is just as well that Sr Gregory did not know that Cecilia and her friend Liz had once canoed down the Zambezi river with crocodiles to the left and hippos to the right. Cecilia nursed Bran back to health and freedom. In later life this nursing back into health in the fullest sense of the world, and helping others to appreciate true freedom was one of the great gifts that Cecilia had and used unsparingly.

On leaving Shaftesbury she began to explore Ignatian spirituality and pastoral ministry more deeply spending time working with drug addicts in London and in a factory in Warrington.

Cecilia moved to London in 1987 as Novice Director – a post she was to hold three times including up to the moment of her death. Her talent as a spiritual accompanier was quickly noticed. She was able to combine her love of God with her care of the individual, her delight in nature with the desire to help others to grow, her joy and humour were born of her genuine humility and deep life of prayer. She was soon involved with the Inter-Congregational Novice Courses where her work and presence was much appreciated.

In 1992 she spent time at St Beuno’s Spirituality Centre in learning retreat and on-going spiritual direction. By 1994 she was running prayer workshops at St Bede’s and in 1995 took over as Director of Works at St Bede’s under Fr Bill Broderick. In 1995 she was appointed Provincial Superior a role she never really liked, but with her spiritual depths and love of people did remarkably well. A contemporary of hers remembered her as a compassionate but decisive provincial …one much sought after for her wisdom and insights.

In 2004 Cecilia became Director of St Bede’s Pastoral Centre and from that moment the centre really took off. She was an outstanding spiritual director herself, but also a skilled trainer and enabler of the ministry of others across a wide ecumenical spectrum. She initiated courses, built up a strong team of trained and committed people who delivered a whole range of courses best known by their acronyms PSD, followed by YISAC and DISAY as requests for training spiritual directors increased. The business side of St Bede’s was delegated to a generation of faithful and efficient administrators, notably Carol and Diane. More recently Sr Agnese frequently stepped in when Cecilia was unwell. Now, Agnese supports Susan Collier who has generously taken on as Acting Director for the duration to keep the St Bede’s programmes running.

In 2015 Cecilia began her third stint as Novice Director on top of her role as Director of St Bede’s, a member of my Council, spiritual accompanier and trainer, retreat giver, photographic expert, chief card producer, creative cook and candle maker. By this time her polymyalgia was really taking a toll on her health and energy, and the chief condition for her taking up the post of Novice Director again was that she cut back on other areas of her ministries. I don’t think she did – subversive to the end!

Her weak immune system meant that she caught every cold and every tummy bug that was around and took much longer than anyone else to get better. She managed her deteriorating health sensibly and heeded the advice of her doctors – if not her provincial. We had noticed that her bouts of ill-health were becoming more frequent and the recovery period was taking longer. The week before she died was a heavy one with interviews and a Provincial Council meeting on the Friday. She had a cold coming on and said she would go to her room and sleep it off over the weekend – as she usually did. On the Sunday morning she was found dead.

I would like to end by quoting from some of the hundreds of cards, emails, letters and entries in the St Bede’s condolence book that have poured in since that Sunday. They are the best tribute to Cecilia:

‘She was so content in her own skin, so free in her spirit, so loved by God, it shone out of her. The smile said it all……when I heard about her sudden death all I could feel was gratitude….such a wise and wonderful woman; gentle and kind, funny and earthy….

Cecilia grew St Bede’s in a remarkable way and she forged so many links across the ecumenical and denominational divides. I am sure that her legacy will continue….she was comfortable with people from any walk of life…such a deep yet down to earth person…..

…a woman with a beaming smile that seemed to come from the depths of her being – a visual statement of her trust in God…..

On one occasion, later in her life, Cecilia attended a course on Transactional Analysis and one exercise was to imagine the participant had written her life story and it only needed a title. The task was to give it a title. Cecilia’s title for her story was: ‘Into Increasing Joy’.

Cecilia, may you rest in peace with ever increasing joy in the Lord you have served so faithfully.”