“God hath his times for everything.” 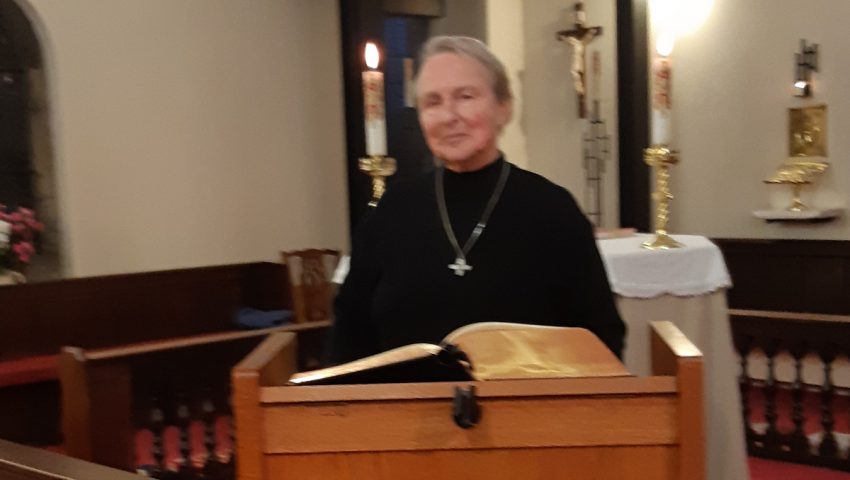 We’re delighted to share with you the talk given by Sister Patricia Harriss on Sunday 26th January 2020 at Osbaldwick, marking the anniversary of Mary Ward’s birth and death.

‘There is a time for everything, and a season for every activity under heaven’, we have heard in our first reading. Mary Ward’s life, which we celebrate this week, was short by modern standards – she was only 60 years and 8 days old when she died in Heworth in January 1645, and was buried here in Osbaldwick. But there was time for a great deal in that short life. Certainly ‘a time to plant and a time to build’ a new kind of religious congregation for women, whose members would be free to go wherever they were needed, and do whatever would ‘help souls’ – help people to find God and meaning in their lives. In those days there was a particular need for schools for girls, of which as yet there were very few. She made 10 foundations in the first 21 years of her work, as far apart as Saint-Omer in the Spanish Netherlands, and Pressburg, now Bratislava, capital of modern Slovakia, via Rome, Naples, Perugia, Munich and Vienna, and each had a school. But her vision was never confined to school-teaching. She speaks of ‘every service of the word of God’: catechising, spiritual conversation, work with prisoners and the sick, whatever might be possible.  We still have a fascinating account by one of the early sisters on mission in England, telling how she travelled around from the house in Suffolk where she lived, ostensibly as companion to a noble lady, ministering to sick people in their homes, catechising children, living for short periods with families recently received into the Catholic Church, helping them to learn how to practise their faith, and exercising a good moral influence in the neighbourhood – she mentions trying to reduce drunkenness and swearing!

But there was also a time for uprooting what had been planted, for tearing down what had been built. In the 10 years between her arrival in Rome on Christmas Eve 1621, after the first of her six journeys across the Alps, mostly on foot, and the suppression of her work by Papal Bull in 1631, the Church authorities had been evasive. The affairs of the ‘English Ladies’, as people called them, had been passed from one Roman department to another, and Mary Ward and her companions were never told what had been decided, even when it became clear that suppression would come. The Council of Trent had decreed, only 60 or so years earlier, that all religious women must be enclosed, and Pope and Cardinals could not see their way to allowing exceptions. The wording of the Bull shows clearly their attitude to Mary Ward and her companions: ‘Free from the laws of enclosure, they wander about at will, and under the guise of promoting the salvation of souls, have been accustomed to attempt… works which are most unsuited to their weak sex and character, to female modesty and particularly to maidenly reserve – works which men of eminence in the science of sacred letters, experience of affairs and innocence of life undertake with much difficulty and only with great caution.’  Therefore these ‘poisonous growths in the Church of God must be torn up by the roots lest they spread themselves further’ – they are to be ‘suppressed, extinct, rooted out, destroyed and abolished.’

And so, for Mary Ward, came the time to be imprisoned in Munich – a time which showed her courage and faith, as she kept in touch with her community a short distance away by letters written in lemon juice, invisible until warmed at the fire, encouraging them, suggesting practical steps they could take, especially by letters to influential people, and revealing her deepest feelings about her situation. She reflects that she might be sent to Rome, though her enemies might well kill her where she is  – ‘But here or there, if God would have me die I would not live, it is but to pay the rent a little before the day, and to live and suffer for God, or die and go to him, are both singular graces and such as I merit not.’ As we know, there were to be more years of ‘living and suffering for God’, in Munich, Rome and finally in England, before the time came to die and go to him, on 30th January 1645.

Mary Ward had her own sayings about time, first ‘God hath his times for everything’. So she was able to wait in hope. To me the most impressive thing about Mary Ward is not only her vision, her conviction that ‘there is no such difference between men and women that women may not do great matters….’, but also her courage in accepting the destruction of her life’s work, and her quiet determination and patient efforts to begin again, to prepare for a future that she would not live to see.  She was completely obedient to what the Church was asking of her – but she worked to keep her remaining companions together; to keep the Munich house, which she rightly saw as hope for the future, and to provide a secure base in Rome. When she was on her death-bed in Heworth she appointed Barbara Babthorpe to succeed her as ‘chief superior’. She believed that God would have his time for new beginnings, and indeed her congregation was not lost, and she was vindicated as its founder by Pope Pius X in 1909.

The other saying was ‘We must wait Almighty God his time, and not run before.’ This sounds similar, but I think also implies more. It invites us to look at the source of our activities and projects – not in our own bright ideas, but in the interplay between our own ideas, which are also part of God’s gift to us; what we see and understand of the world around us; and our listening in prayer to where God is leading. Mary Ward often spoke of ‘what God would have done’ and rejected certain proposals made to her about the organisation of her Institute because ‘they seemed not what God would have done.’ And that leads us to another aspect of God’s will. We often speak of it in a narrow way, as if ‘God’s will’ concerns only ourselves and those nearest to us. But God’s will is vast and inclusive, and concerns the whole universe, of which we here and now are only a tiny part. Mary Ward’s vision, Mary Ward’s work, was part of God’s larger story, which is still unfolding – and so are our own visions and work. It is only in ‘Almighty God his time’ that we shall understand fully what all the ‘times’ of Mary Ward’s life, and of our own, really mean. If we can see God’s will in that way, perhaps we shall be able to live with courage, patience and hope, as she did.